On May 17, 2022, residents will decide on a $33,618,101 budget for the 2022-2023 school year, elect candidates to fill four open seats on the Board of Education, and decide on a seperate proposition that would allow the District to create a Capital Reserve Fund.

The school budget carries a projected tax levy increase of 2.75 percent, which is below the allowable tax levy limit of 3.48 percent set by the NYS property tax cap. Spending is up a total of $567,718, a 1.72 percent increase from the 2021-22 budget, largely the result of inflation, contractual obligations, and rising health and dental insurance premiums. The District’s ongoing practice of long-term planning and using reserves and fund balance to offset cost increases helped the District reduce the tax levy and keep it under the cap.

“This budget provides a good value for our community by being sensitive to our taxpayers and providing our students with what they need and deserve,” said Dr. Sal DeAngelo, Chatham’s superintendent of schools. “In this period of rapid inflation, our focus was on maintaining our entire educational program while remaining vigilant about keeping spending in check.”

Budget highlights include no cuts to student programming or staffing. To meet program needs, one special education teaching position no longer needed at the middle school was reallocated to the elementary school to increase special education support needed for kindergarten and first grade.

Included in the budget is the purchase of two large school buses to replace two buses with severe mechanical issues, part of the District’s ongoing bus replacement plan that keeps our fleet running safely and reliably. For every dollar spent on bus purchases, the District receives approximately $0.32 (32%) back in aid from New York State.

How Does the District Use Reserves and Fund Balance?

Chatham CSD uses reserve accounts and fund balance to reduce year-to-year increases to the tax levy. Using reserves and fund balance in this manner is part of the District’s long-term fiscal plan to provide for the financial stability of the District. Chatham’s 2021-2030 Financial Reserve Plan is available on our Budget Information page at www.chathamcentralschools.com.

School officials will use reserves as necessary to cover revenue in areas where costs commonly fluctuate, such as retirement health insurance, unemployment insurance, workers’ compensation, and tax certiorari.

The District allocated $1,341,600 of fund balance to reduce this year’s tax levy increase. Fund balance is a reserve similar to a savings account; when District expenses are less than expected, or revenues are higher than projected, money remaining at the end of the year is held in the fund balance. The District utilizes fund balance each year as revenue in the budget to minimize spending cuts and hold down tax increases.

How was the Budget Developed?

The proposed budget is part of a five-year fiscal plan to manage the financial stability of the District and provide our community’s children with a first-rate education. School officials carefully weighed how budgeting decisions will affect not only the current budget year, but also District finances in the years to come. The Finance Committee, composed of Board members, school officials, and a community member, reviewed all aspects of the budget throughout its development and made recommendations to the Board of Education, beginning in November with a review of contract negotiations and Chatham’s Financial Reserve Plan.

In developing the budget, school officials followed several guiding principles: provide a strong educational program that prepares students for success after graduation; base staffing on enrollment and program needs; remain sensitive to taxpayers and the economic climate; maximize available resources; and do not use one-time funding sources to cover ongoing expenses.

In January, the District developed revenue projections for next school year based on Governor Hochul’s state budget proposal. In February, the District calculated its tax levy cap using the required state formula, which capped Chatham’s 2022 tax levy growth at 3.48 percent.

As a matter of practice, District officials thoroughly reviewed the budget and made adjustments to staffing, equipment, and supplies based on program needs, student enrollment, efficiency measures, and state mandates. The District also allocated fund balance to help offset the impact of cost increases on the tax levy.

The Board of Education adopted its proposed 2022-23 budget for Chatham Central Schools at its April 5 meeting.

Public budget presentations were made at regularly scheduled Board meetings beginning in February with a final presentation at the budget hearing on May 10. Copies of presentations and other budget documents were posted to the school website as they became available.

Did you know that the school budget fully funds the Chatham Public Library? It’s true! The Library is one of only two public libraries in the state that are part of a school system. This past year, the Chatham Public Library and its branch in Canaan served more than 5,236 library card holders, who checked out 55,755 books and media and 22,281 eBooks, audiobooks, and streaming videos. Launched in the Fall of 2021, the Library’s new mobile-friendly website chathampubliclibrary.org now gives users of all abilities better access to the Library’s many digital resources and collections.

The Library has returned to full in-person services and continues to offer lobby-pickup services. Over 40,000 visits were recorded over the course of 2021 and 2,742 patrons participated in the Library’s 355 programs in-person or online. Library staff also brought services out into the community with outreach programs at Camphill Ghent, Summerfest and the Farmers and Makers’ Market. Thanks to partnerships with the Columbia Land Conservancy, Talk! Read! Sing! Columbia, and the Friends of the Chatham Public Library, collections expanded to serve broader audiences with explorer backpacks to help patrons get outdoors and learn about the natural world, early literacy materials in Spanish and English, and At-Home Learning Kits with STEM and literacy activities to support children and their families - all available for checkout with your library card.

What Happens if Voters do not Approve the Budget?

The NYS property tax cap law holds the contingency budget tax levy increase at 0 percent, requiring the District to levy the same amount of taxes (or less) as it did in 2021, regardless of cost increases. However, all state mandated programs, whether funded by state aid or not, would need to be retained. A contingency budget also prevents spending on new equipment and limits public use of District facilities.

These regulations mean that in a contingent budget, the Board would need to make $864,400 in cuts to the budget proposal. The District would be required to eliminate any purchases of new equipment from the budget (except where safety is concerned), including replacement buses, and would have to consider program reductions, including cuts to instructional and non-instructional budgets. 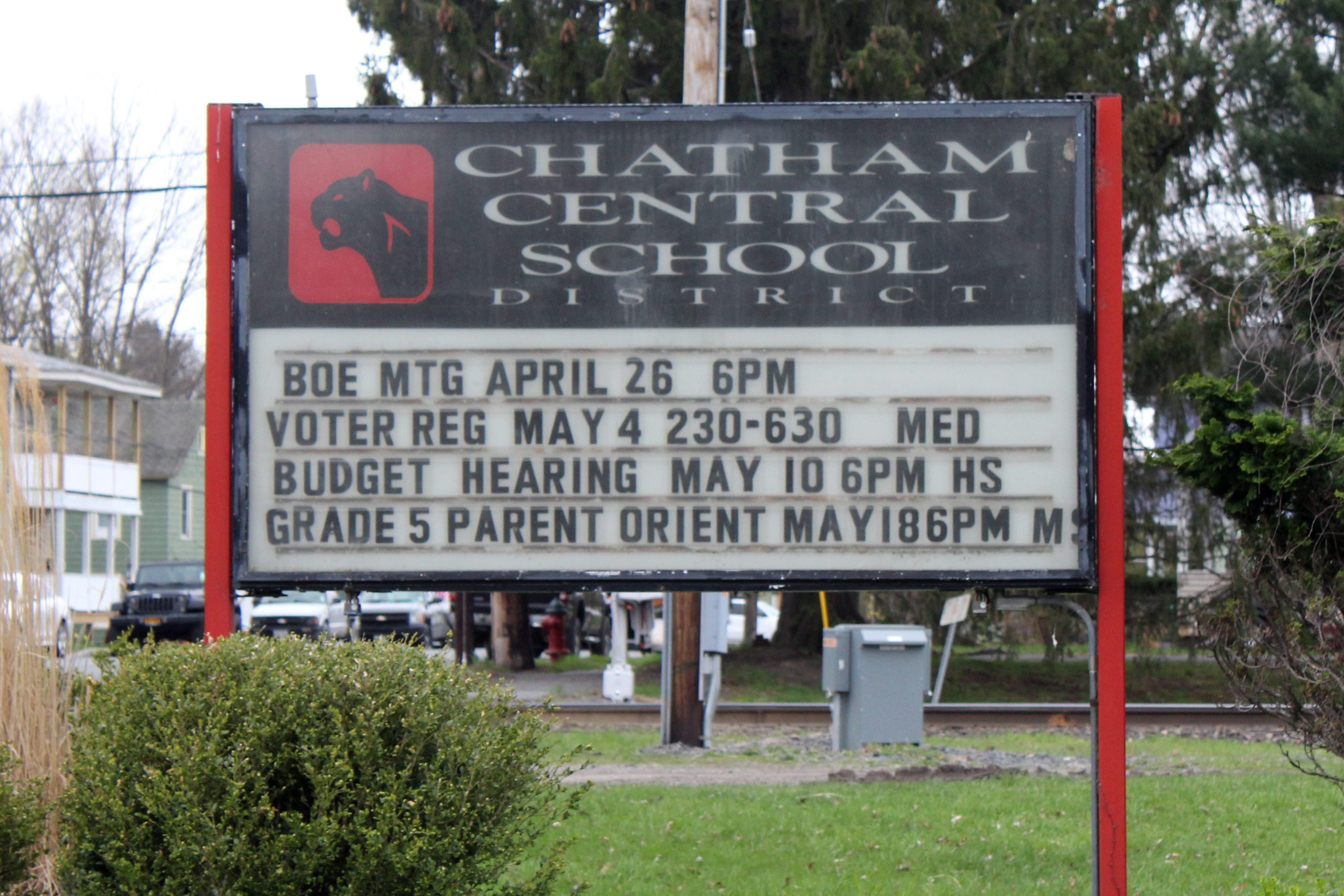 Included in the 2022-23 budget is a small capital project to replace the District’s letterboard sign on Woodbridge Avenue with a modern digital message board. The current sign is approximately 25 years old and has very limited space for messages. Its replacement would feature programmable, energy-efficient LED lights that can display multiple sets of messages and be updated remotely by computer.

The project would not exceed $100,000 and does not increase the 2022-23 budget because money for small annual capital projects was built into the budget in previous years. Completing this upgrade as a capital project provides significant savings to local taxpayers because Chatham is entitled to approximately 50 percent state aid on capital projects, meaning the District would be reimbursed for approximately half the cost of this project.